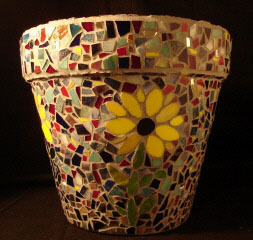 The ancient and mystical art of mosaics has seen a recent revival around the world. Whether it’s in the style of the Roman traditionalists or the complexities of the shard method, mosaics are popping up everywhere once again. From galleries and museums to subway tunnels and hotel lobbies, from airports and kitchen countertops to backyard gardens, they are adorning both public arenas and private residences. Today’s mosaic artists still follow many of the same techniques and principles as their predecessors did thousands of years ago. Styles range from abstract to representational, traditional to deco, and from the simple to the extremely complex. This unique and original art, revered for its intricacy and beauty, is as pleasing to create as it is to view.

Called the eternal art form by many, mosaics can be traced as far back as the ancient civilizations of Mesopotamia. There, pebbles were used as floor coverings and as embellishments on walls, for decoration as well as for added strength. Remnants of mosaic pavements in the ancient gardens of China and as far away as the Mayan ruins have also been unearthed. Thousands of years of history surrounds mosaic art, and its popularity today is testament to its enduring appeal.

Mosaic as an art form first thrived during the Greco-Roman period, from Alexander the Great until the fall of Rome. The Greeks began cutting natural stone into small triangles, squares, and rectangles called tesserae, replacing the pebble mosaics originally used to cover their floors. Today, the term tesserae describes all types of materials used to make mosaics. This style was embraced by the Romans, who by 200 AD were beginning to create mosaics on walls as well, with examples such as “The Battle of Isus”, depicting the famous battle of Alexander the Great and Darius. Public buildings and common areas were frequently adorned by the intricate and fascinating patterns of local mosaic artists; some copied from Far Eastern rugs, some illustrated important events in history, some recorded their daily lives.

The next surge came during the Byzantine era, from the 5th to the 15th centuries. It was during this period that mosaics reached their pinnacle of quality and excellence. No longer confined to discrete panels, mosaics were created covering entire walls and ceilings in buildings throughout Europe, such as St. Peter’s Basilica in Rome. Many of these spectacular creations still remain for us to marvel at today. By this time, glass and gold tesserae were also being freely added to the images, magnifying their luminosity and intensity with their epic scale. Cathedrals, public buildings, royal estates, museums, and private homes were all palettes for the mosaic artist. By the middle of the 15th century however, with the advent of the Renaissance, there became a renewed interest in pictorial realism, and a rejection of the use of gold so common at this time in mosaics. Used mainly afterward in church decoration, mosaics increasingly began to imitate contemporary painting.

The Art Nouveau movement in the late 19th and early 20th centuries once again rekindled the interest in mosaic art, especially on the exteriors of buildings. Two significant artists redefined the traditional methods of mosaic art. Antoni Gaudi, a Spanish architect working in Barcelona, created startling new architectural forms, many of which he covered with mosaics. Influenced by the Moorish tradition of using glazed tile, Gaudi improvised by adding fragments of tiles, bits and pieces of stone, and shards of glass. In the 1930’s, Raymond Eduardo Isidore, of Chartres, France began the mosaic work that would eventually cover every surface of his house, both inside and out, using every shard, fragment, and piece of usable material he could find. His neighbors called him Picassiette, which translated, means “plate stealer”. Contemporary mosaic artists have an abundant source of traditions and inspirations from which to draw on, allowing them to add their own personalities and modern visions to such an ancient art, and stretch the limits even further.

Traditional mosaics are based on the Roman and Greek methods of cutting tile, stone and other tesserae into uniform shapes, and then placing them onto a prepared surface to form a design. Mosaic arrangements may be done by using either the direct or indirect method. Using the direct method, each bit of stone or tile is placed face up directly into a soft medium, such as mortar. The surface remains slightly uneven, which allows interesting light patterns to form. By using the indirect method, the artist can create and recreate their design on a temporary surface many times before cementing it in place. The finished piece has a much flatter, more uniform surface. Traditional mosaics can range from simple geometric patterns to intricate images and designs.

Shard Art, also known as Bits and Pieces, or Pique Assiette, refers to the blending of fragmented pieces of broken pottery, buttons, china, glass, beads, and other collectibles which are then cemented onto a base. The base the artist chooses, as well as the combination of pieces are limited only by the imagination of the creator. Everyday objects are transformed into vibrant works of art; a simple lamp or mirror becomes a finely crafted sculpture. Each shard is an artifact, reminding us of dinners with families, treasured heirlooms, gifts from friends, or remnants of the past. By bringing together bits and pieces that have had other lives, and served other purposes, modern artists can use this distinctive technique to produce truly contemporary and unique pieces with overtones of the past. 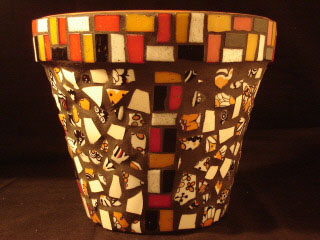